Prunes for Breakfast - One Man's War

My last post here was about a mother's journey to come to terms with her son's death. This week I'm writing about a son's journey (of sorts) to connect with his father.

‘Many years after the deaths of my parents, my aunt handed me a box filled with letters that my father had written to my mother over the period from 1940 to 1945. This was the starting point of a journey for me to rediscover the father I had never really known...’

I was delighted to have the opportunity to work as editor with author John Searancke on this fascinating story in which we see World War Two through the eyes of an ordinary man from his calling up in 1940 to his release from a prisoner of war camp in Germany in 1945. 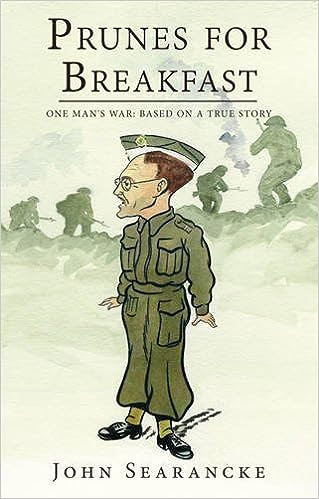 The book's curious title shows how we see the war through the minutiae of daily events - the details the man chose to write to his wife, often downplaying the harrowing experiences he actually lived through - such as the series of bloody skirmishes from the beaches of Normandy until he led his troops to face the formidable might of the SS Panzers, his battle coming to an abrupt end in an orchard surrounded by the enemy.

John, who was born during these years - the early years of the war when his father was sent on one training course after another - and who makes an appearance through the letters, never really knew his father, so it was a feat of imagination to weave the letters into a fictional 'memoir' based on a vast amount of research. The book is a very good read, especially for anyone interested in that era.

John Searancke grew up in Ashby-de-la-Zouch and has been a hotel and restaurant owner, director and chairman of a marketing consortium, and a partner of a commercial legal services company. He now lives with his wife Sally in northern Tenerife, and is a restaurant reviewer for the Canary Islands newspaper Island Connections. His first book was Dog Days in the Fortunate Islands (Matador, 2014).

John's website, which has a gallery page with images related to both his books, is: www.johnsearancke.com.

You can also meet the author at:
http://www.rukiapublishing.com/meet-the-author-john-searancke.html